Forget Netflix’s Tiger King, this 1981 cult film revived by Drafthouse Films is the definitive viewing for mind-blowing, ill-advised narratives to put in your eye holes. One of the most disastrous and dangerous productions of all time, Roar boasts that no animals were harmed during production. The cast and crew, however, didn’t fare as well, with roughly 70 touted injuries during the extensive production with 150 untrained wild cats. Some of those injuries were life-threatening. Alamo Drafthouse selected Roar as their latest at-home VOD offering, and if you haven’t seen this utterly insane film that plays like an intense, and horror-fueled Disney story on acid, well, you should. There’s nothing else like it.

Billed as a family-friendly action-adventure, the plot sees a naturalist living with 150 big cats in East Africa. He’s expecting his wife and three kids to arrive from Chicago, but a series of events leaves him off-site rushing to get home while his family shows up and is left alone to fend off the beasts. Even on paper, the premise sounds intense.

The opening sequence gives writing credits to some of the lions because they were wild and untrained; these animals weren’t reliable performers. They behaved and did whatever they wanted, causing lead star, writer, producer, and director Noel Marshall to accommodate the production accordingly. It turned a nine-month shoot into a five year one, with 11 years total dedicated to getting this film made.

Actress Tippi Hedren (The Birds, Marnie) and then-husband Noel Marshall, an executive producer of The Exorcist, became devoted to raising awareness about the inhumane treatment of big cats in captivity as well as the over-hunting of them in the wild after a safari in Africa. It inspired them to create Roar, which they felt would raise awareness for their cause. Trainers of big cats thought this was an ill-advised idea. Because they wanted multiple species, which don’t coexist naturally and are territorial by nature, Marshall and Hedren began raising cubs to acclimate long before photography began. Before they knew it, they were acquiring more, and the cats they raised were breeding, reaching around 150 total for the film. 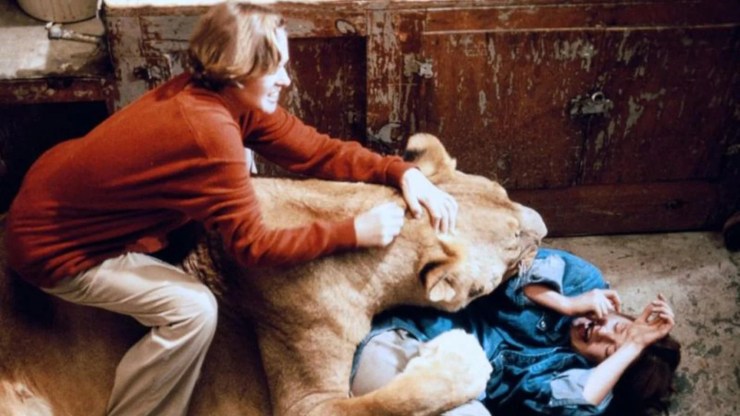 Lighthearted family moments, humor, and an upbeat score by Terrence P. Minogue were intentional choices to push the film into family adventure territory. Still, it did nothing to diminish the intensity of the ever-present danger the on-screen actors were in for the entire runtime. It didn’t help that of the credited leading lions, the antagonistic lion Togar spends every moment covered in blood like a slasher villain. While his distinct appearance marks him as dangerous, the reality is that all of the animals are dangerous, and the actors’ fear is visceral on a whole other level in context. The animals’ behavior was so unpredictable that most of the actors remained visibly on edge. It gave the film a thriller tone. It didn’t help that there were plenty of bloody sequences.

Actress Melanie Griffith, Hedren’s daughter, was mauled by a lion, resulting in over 100 stitches and reconstructive surgery. The mauling on screen, no less. Hedren suffered a broken leg and deep scalp wounds. Cinematographer Jan de Bont received 220 stitches on his head from a lion scalping. Taking the crown of injuries, however, was Noel Marshall. He’d endured so many bites, gouges, and wounds from the cats that he eventually was hospitalized for gangrene.

Released in 1981, except domestically, Roar fell into obscurity until a re-release in 2015. The insane behind-the-scenes story helped amass a cult following throughout the years. Many films feature stranger-than-fiction production tales, but none that bleed over to the on-screen narrative. Not like this. Marshall and Hedren intended for a family-friendly ecological story, but what they wound up with is an acid-trip animals-attack horror film that took a decade or so to make.

Roar isn’t a horror film in the traditional sense, but the reality of their dangerous situation created horror nonetheless. A career-derailing film for Noel Marshall, and a film that could’ve easily cost lives in the process, Roar is a film that demands to be seen to be believed.

Suresh Raina reveals why MS Dhoni decided to bat ahead of...

6 Family Latinx Actors We All Recognize