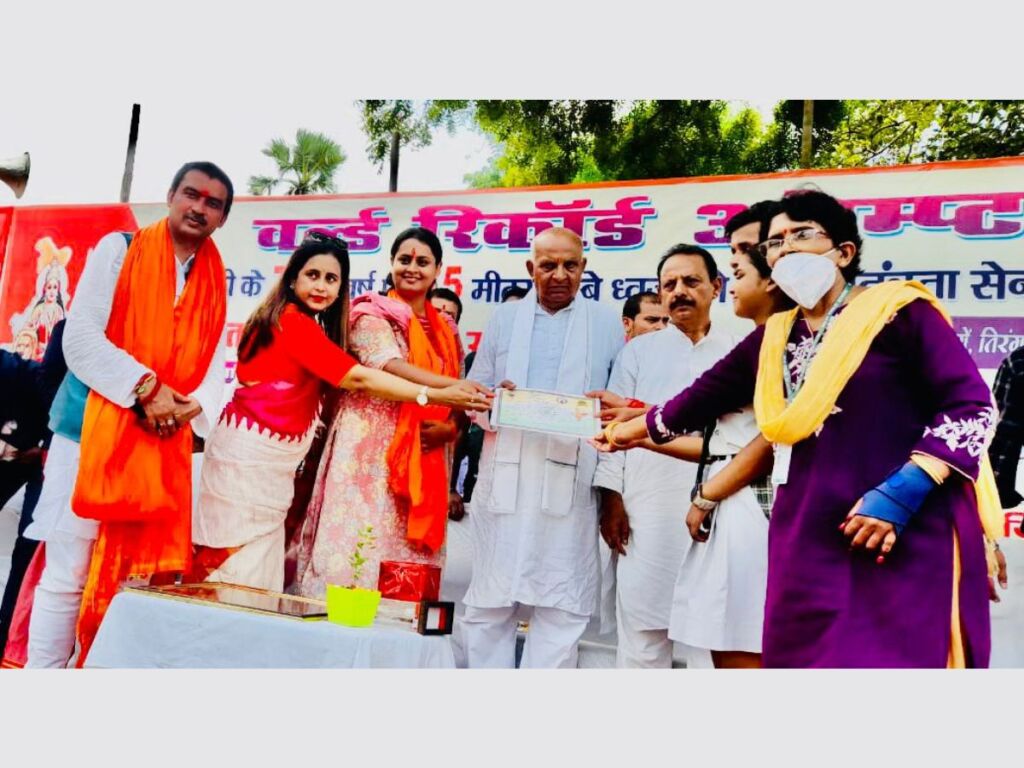 Bhagalpur/Greater Ranchi (India), August 18: On the occasion of 75th Independence day, along with the nationwide celebration of Azadi ka Amrit Mahotsav and Har Ghar Tiranga campaign, DPS Bhagalpur and DPS Greater Ranchi arranged a Tiranga Yatra with a whooping 75 meter long Indian national flag on 13th August on the eve of August Kranti Movement (The Quit India Movement initialized By Mahatma Gandhi in 1942).

The spectacular Tiranga March was part of the day-long celebration organized by the Angika development society, the body that runs both DPS Bhagalpur and DPS Greater Ranchi. The historic march with the 75-meter national flag started from Bhagalpur’s Sandish compound and ended at Lajpat Nagar, where 75 students carried the flag collectively while being dressed as freedom fighters. Also, a cultural program was organized by the students to pay tributes to the heroes of India’s independence movement and to celebrate the 75th Independence day.

Rajesh Srivastava, the pro-vice chairman of DPS Bhagalpur, DPS Greater Ranchi and chairman of VBCE, said, “We are very proud of being able to organize the event especially the Tiranga March. All our students, teachers and staff worked hard and made this formidable task possible despite having several challenges in terms of execution. India had never seen such a long flag before, and our effort was acknowledged by the World Book of Records, which is a great achievement. We will also hand over this 75-meter-long flag to the Hon’ble Prime Minister soon.”

Dr. Arunima Chakravorty, the principal of DPS Bhagalpur and DPS Greater Ranchi, remarked, “The occasion of 75th independence day is significant to all of us. We identified this as an excellent opportunity to let our students flaunt their potential in the extra-curricular domain. The grand success of the Tiranga Yatra and its inclusion in the World Book of Record proves that belonging to one of the premier schools of India, our students, apart from excelling in studies, is also flourishing in extra-curricular activities, fully utilizing the holistic development program of DPS while getting benefited from its world-class infrastructural support.”

Delhi Public School, popularly known as DPS, is a leading educational institute imparting secondary and higher secondary education. In a competitive global world, only those who have multiple skills and a varied canvas of exposure will be the ones who would eventually succeed and shine. Towards this objective, DPS’s educational program is interwoven with various activities to inculcate diverse skills and encourage talents in the students through healthy interactions and a holistic teaching-learning process.

With Focus On Sustainable Recruitment, Collej Takes The Initiative Of Grooming UX Designers To Leverage Their Careers